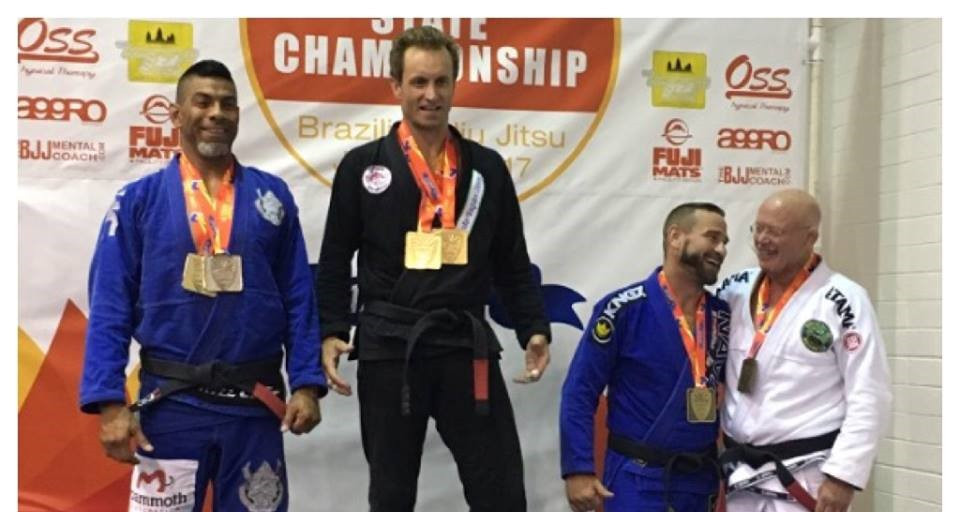 How Can Yoga Benefit Your BJJ Game? An Interview with Yogi Nogi

Team Undisputed Black Belt Josh Stockman (or maybe you know him as “Yogi Nogi”) started training in Jiu Jitsu and Yoga back in 2006.  In addition to his own competition goals, Josh also wants to give us Jiu Jitsu practitioners something incredibly useful for improving our BJJ games through a practice of yoga.  We caught up with Josh this week for some background:

So do you want to clear the air of how the Yogi Nogi name came about?

Years ago, when social media first came out, my job wasn’t allowing us to use our names for social media accounts so I had to make up a name for Facebook and that’s when I came up with Yogi Nogi and it stuck.  Really, it started off as a joke.

It’s such a good name, it’s one of those things that makes you say, “Why didn’t I think of that?”

Yeah half the people I run into call me Yogi, I should have copyrighted it.

How did this all start for you?

I actually dove into Jiu Jitsu and Yoga about the same time in ’06.  I was dabbling in Jiu Jitsu because I wanted to do an MMA fight.  I was at the International Karate Championships in Long Beach and ran into Diamond Dallas Page who at that time was doing a program called “Yoga for Regular Guys” which is now his DDP Yoga series.  They were doing demonstrations and they were the first athletic, non-squirrely-skinny looking guys that I’d ever seen doing yoga.  I talked to DDP a little and he was a really great guy so I got his DVDs and a few books and practiced off of those two or three times a week for a couple years before I ever took a yoga class.  When hot yoga took off I really started doing that but then I really messed up my neck in ‘09.

Well I was training with some wrestlers back in Oregon where I’m from, and I took a half-assed shot and the guy half sprawled on me and I got folded in half on my neck.  It just got worse and I ended up with a bulging disk and had to lay off BJJ for a while.  Out of boredom and wanting something to do I started doing lots and lots of yoga and when I came back to BJJ I found it had really healed up.  People always want to say that yoga heals like it’s some sort of magic, but really it heals because of three things; it realigns you structurally so you’re not aggravating injuries with lousy posture, the movement in the injured area increases blood flow bringing in nutrient-rich blood and removing scar tissue, and the added range of motion helps avoid re-injury.  And more than that the psychological component is huge because you’re actively taking part in your own recovery.

So describe how your Grappling with Yoga series came to be:

Oh, it was awesome! Really serendipitous.  Someone forwarded me an email blast that Mike Zenga and Bernardo Faria from BJJ Fanatics out of Boston had sent out.  I responded and they set up a phone call.  They explained they wanted to do a yoga series because Sebastian Brosche had pulled his Yoga for BJJ video off the site and they wanted to replace it.  Demographically they wanted a bigger guy, an actively competing black belt and an older guy and I was like, “I check off all those boxes!”  I said, “I know better yoga teachers than me” and they said those guys aren’t black belts.  “I know better black belts than me”; but they aren’t yoga teachers.  So it really ended up being a great fit.

They flew me out, we filmed like nine hours and I edited the crap out of it.  We came out with a four-disc set also available for digital download that I’m really proud of.  It takes you through practical warm ups, works the muscles in extension, then stretches the crap out of them to improve range of motion.  I wanted to demystify yoga for fighters and BJJ athletes and provide practical exercises and principals that you can use every day in your warm-ups and after class.

Were there any competitions or matches where your flexibility helped?

Absolutely.  It’s allowed me to survive Carlos Farias in a few spots that would have been very uncomfortable.  I’m not saying that it solves the Carlos problem, he eventually gets to you, but it helps you to be in uncomfortable positions and breathe like when you’re getting stacked.  There are a couple of good photos out there of Carlos folding me in half.

Yoga every day.  At least six tournaments this year and I want to go at least to Superbowl without drinking any beer.  Something I do every year just to prove to my wife that I can.  Plus, after the holiday cheese and chocolate extravaganza I have 15 pounds I have to melt off.