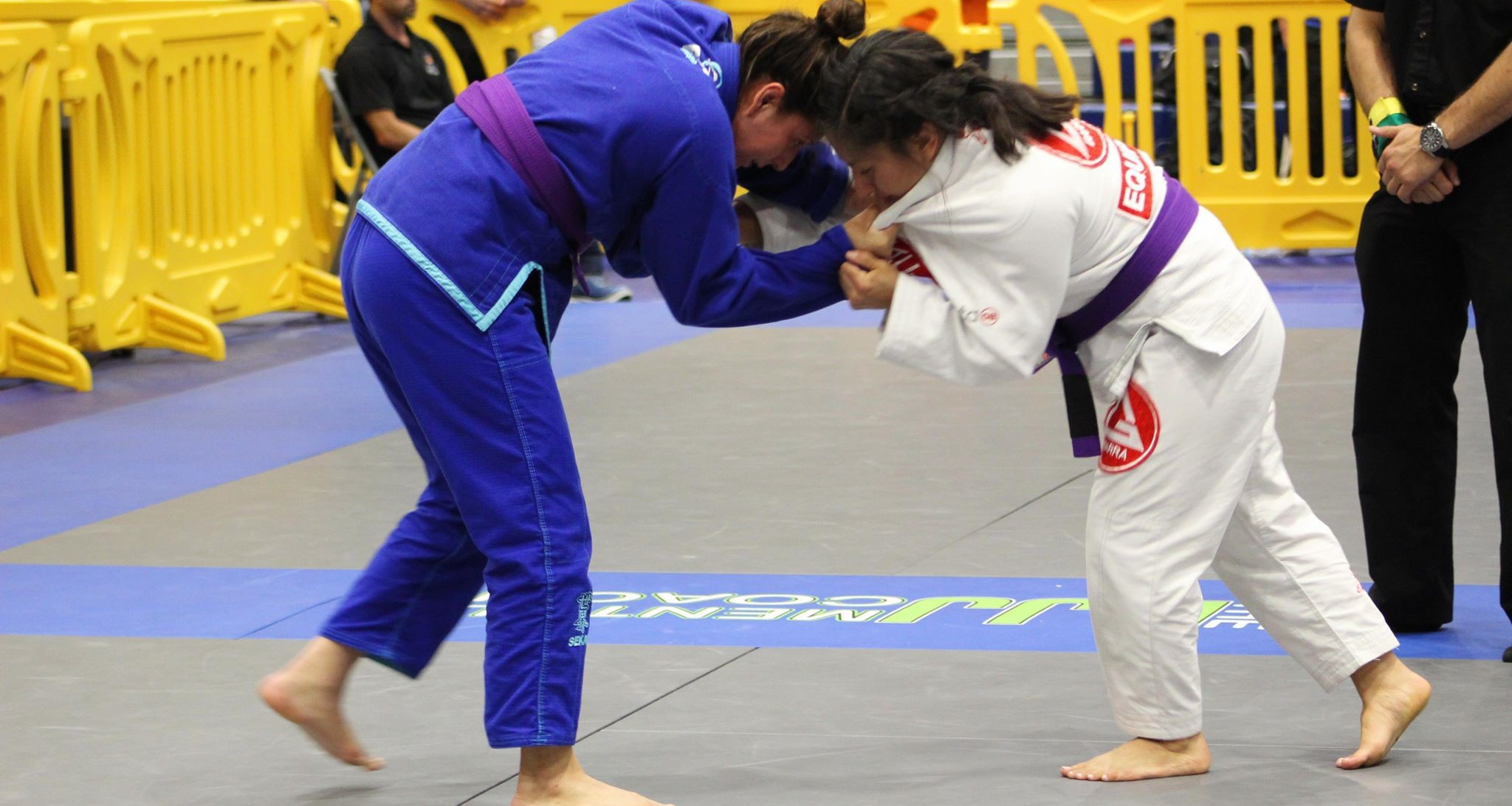 “Navajos are a matrilineal people. Women are regarded as strong and independent,” says Mei-Lein Preston, April’s Competitor of the Month. Mei-Lein is a purple belt out of Gracie Barra Phoenix, but her Jiu Jitsu journey has more humble roots, and a deeper meaning than one typically hears. “My great-grandmother and the many generations that came before and after her were strong and immensely fierce women.  Growing up, I naturally looked to do things that empowered me to be like them.”

Growing up in Flagstaff, AZ, Mei-Lein credits her uncle and siblings for instilling toughness in her and her sisters. It wasn’t until she watched MMA fights with her husband as an adult that she noticed grappling as a sport. “In 2012, it being a smaller town, there weren’t any actual Jiu Jitsu schools in Flagstaff at the time. Luckily, my local athletic club had a Jiu Jitsu/wrestling club where a small group trained.” Even though the classes were no-gi and mostly wrestling, Mei-Lein fell in love after her first class.

After about a year her coach Terry Hayne was unable to continue training, and “graciously” introduced her to Professor Max Goldberg at Gracie Barra Flagstaff. “I was nervous because they were wearing what looked like ‘kimonos’. I’d never fought with a gi before; I felt like a fish out of water. Everyone at the gym became family and I found myself there every day. I attended as many classes as I could, it became my second home. I received my purple belt under Professor Max at Gracie Barra Flagstaff.”

Mei-Lein’s competitive spirit lead her to sign up a couple of months after she started training. At the time it was only no-gi; she won double gold and “wanted more”. “With each tournament, I wanted to be a better fighter than the previous fight. I persistently pushed myself harder and harder with each training. Ultimately, I love tournaments for this very reason; it motivates you to push forward and past your limits.” This drive to improve lead to the Pan Ams, where Mei-Lein won gold as a blue belt.

Gracie Barra being as wide-spread as it is, Mei-Lein developed relationships with the Gracie Barra schools in the Phoenix area, and found a natural home when she eventually moved to Phoenix. “Professor Murillo Carvalho and Flavio Almeida have since continued to challenge me to become a better person/fighter than I was before. Furthermore, I’ve become more inspired to share with others what Jiu Jitsu has done for me. I love teaching the women’s class there.”

For Mei-Lein, however, teaching at Gracie Barra is about more than sharing Jiu Jitsu. “There is something amazing about seeing a woman confident and empowered to protect herself. Teaching women how to defend themselves is something that is close to the heart for me. In the United States, 4 in 5 Native American women have experienced violence in their lifetime. Violence against Native American women is so prevalent, yet it’s hardly reported in mainstream news. My dream is to one day have a school and be able to travel to different Native American communities and teach women Jiu Jitsu. There is a need for more women in Jiu Jitsu – women are sacred.”

Mei-Lein is excited to live and train in the Phoenix area, which gives her the opportunity to compete in the upcoming Copa Bela tournament for the first time. “I think it’s absolutely amazing that the tournaments contribute to the growth of the female Jiu Jitsu community. It’s a male-dominated sport, and women’s matches tend to get overlooked.  Any chance for women to be front and center and show case their skills is appreciated.  It’s always uplifting to be surrounded by fellow women that share my interest in Jiu Jitsu.  It’s a great being able to support each other.  Any gathering of women speaks of truth and healing and I hope more tournaments will follow lead in promoting more female participation.”

When asked what advice she would give to women who are interested in starting Jiu Jitsu, it’s simple: “Just show up; it will change your life, and you’ll without a doubt fall in love.” In fact, if she saw herself walking through the door for the first time, she would offer the same words of encouragement: “You CAN do this, and you will. You may be the smallest, and the only girl, but you belong here. Jiu Jitsu is for everyone. Don’t be intimidated because before you know it, you’ll be able to kick all their butts!”

As she prepares for the Copa Bela tournament on April 27th, Mei-Lein Preston reflects on the best and most difficult parts of competing. “My favorite part is overcoming obstacles. You become more mentally and physically tough. The most difficult part is making that choice of signing up. Each time I sign up, I still get nervous, but it’s great. I can stare at that fear and say ‘you are not holding me back: I’m going to overcome you!’”