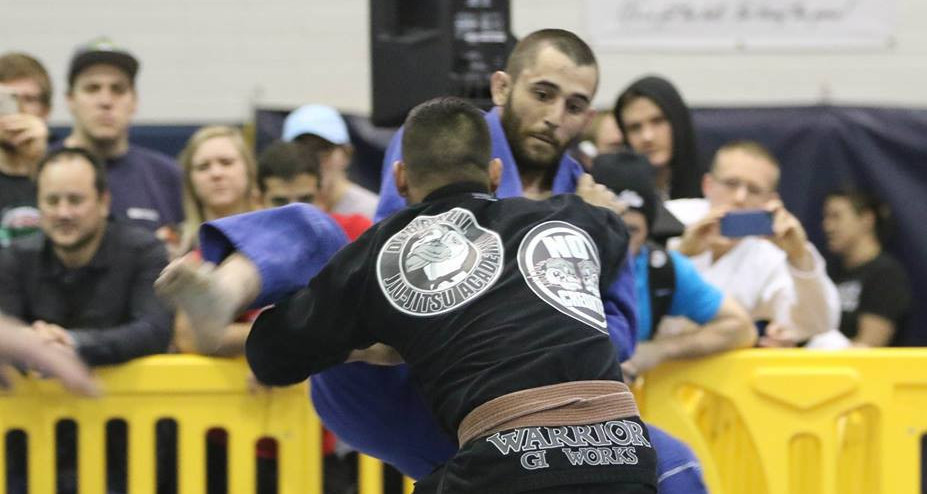 Nestled just south of Tucson’s Barrio Viejo is the city’s first Brazilian Jiu Jitsu school, De Brazil Jiu Jitsu Academy. De Brazil is led by Professor Martín Escobar, a 4th degree black belt under Rey Diogo of the Carlson Gracie Team. Escobar’s first introduction to Jiu Jitsu was through Royce Gracie and his performance in the early days of the UFC, back when it was set up as a tournament with several fights in one night. He was impressed by Gracie’s ability to defeat larger opponents despite his size through the use of Brazilian Jiu Jitsu. Inspired by this, Escobar began his Jiu Jitsu training in Phoenix since there was no school in Tucson at the time. Jiu Jitsu was also a practical martial art for Escobar to pursue because not only would it keep him in shape but it would also serve as a form of protection in his line of work. Escobar recently retired from the Tucson Police Department after serving as an officer for twenty two years. Jiu Jitsu provided an effective form of self-defense in additional to the training he received as a police officer.

Eventually, Escobar felt the need to start a school in Tucson. Encouraged by a friend under the idea that “if you build it they will come”, he opened De Brazil in 1997. The name of the academy is a reflection of the sports origins and also pays homage to Escobar’s Mexican heritage. The Portuguese translation for “of Brazil” is “do Brasil” and he has often been corrected by Brazilian black belts, pointing out that “de” is an homage to his Spanish roots. The academy is a testament to Escobar’s passion for the gentle art. De Brazil was opened on the condition that it would be self-sustaining and not affect his family or career. For Escobar, running an academy and teaching Jiu Jitsu is not about money or personal gain but is ultimately to create better people, for which Jiu Jitsu is the perfect vehicle.

When asked about what his school represents, Escobar said, “There is one banner hanging in the academy. It reads: Honor, Respect, and Loyalty.” Essentially, that is the ethos of his school and Escobar believes that adhering to these values will help you along your Jiu Jitsu journey and also in your personal life off the mats. Escobar views Jiu Jitsu as his passion and also as a path to helping others. Ultimately his main mission is to create better individuals through the lessons learned from practicing Brazilian Jiu Jitsu. Because of this and his love of the sport he feels the relationship between himself, the academy, and his students is that of a family. He truly means it when he says you become a part of his family. Escobar’s children, Levi and Miranda, are students of his that have been promoted to black and purple belts, respectively. Being able to coach them and share his legacy with them is one of his proudest accomplishments.

Escobar believes that Jiu Jitsu has so much to offer and can do wonders for personal development. He has seen it convert introverts into outgoing people and totally change the lives of people to the extent that one student has a tattoo that reads “Jiu Jitsu saved my life.” It is incredible for building community and bringing together people from different backgrounds. Although the art originally had a reputation for being tough and brutal, De Brazil’s academy is open to anyone who would like to train and make a positive change in his or her life.